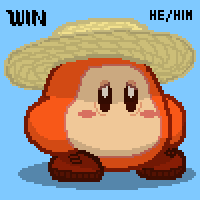 Win in a an elder dee that lives on the road. He was part of the resistance effort that eventually overthrew the king and abolished the monarchy in the days before the settlement. Win soon left after helping to build the settlement to visit other other dees and help them establish free settlements, and eventually just to wander the land after helping all the dees he cound find.

Win and Cherri were friends as children and dated as when they were young before realizing neither had romantic feelings for the other. They are still close friends and have an intimate trust in one another. Win stays in the guest room at Cherri's house when he visits the settlement.

Win and Travis were in a romantic relationship in the days before the revolution. After Travis had passed away in the storming of the castle, Win decided to take to the road to help other dees. Travis occastionally visits Win in his dreams when he's able to.