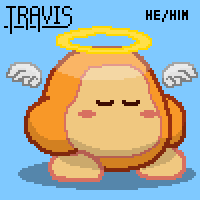 A dee that has entered the next life. He was part of the resistance against the monarchy. Travis passed away in the storming of the castle to usurp the king. He now works in some unknown realm fighting against unjust authority of all kinds. Despite his appearance, Travis expresses that he is not an angel.

Travis and Win were in a romantic relationship in the days before the revolution. After Travis had passed away in the storming of the castle, Win decided to take to the road to help other dees. Travis occastionally visits Win in his dreams when he's able to.